Today, Google has released an update concerning the YouTube app for the iOS which supports iPhone 5’s display, and provide users with the facility to stream video contents over AirPlay to the Apple TV or several other similar gadgets more easily. This new application also provides complete support for the iPad, with an extremely user-friendly interface that is particularly developed for Apple’s tablets.

Horia Ciurdar, from Google states that more than 25% of entire YouTube watching happens to be on the Smartphones. Since a YouTube app was launched back in September, Google has been working exceedingly hard to improvise the app based on user experience and feedback.

Now, the recently updated YouTube app offers an ‘improvised’ and superior AirPlay support, allowing users to capture photos and videos over their Apple TV. The videos are considered to load faster and the content plays smoothly. The VoiceOver support has also been improved by Google for those who require visual impairments. 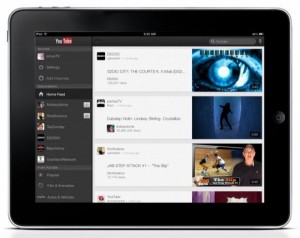 The latest interface is quite good, but not anything insanely cool. It simply integrated a collapsible sidebar that floats over the top of the video you prefer to watch and he channel browser reachable through the YouTube logo. It is something solid, but not incredible. As a matter of fact, there is a ton of wasted space which is on the main menu and makes just three videos appear as default ones on the main screen. The iconography still is crisp and there does not seem to to have any major problems with it on your first run-through.

When the app was launched in September, it did not support the iPad interface, however; Google stated that it would be available soon. The release of the app came around a month after it was declared that Apple will remove the YouTube application from its springboard come the launch of iOS 6.

Since then, YouTube has been doing quite well, topped the Apple’s charts concerning the free applications in the App Store for consecutive 4 months. The application also provides ad spaces for Google, which is happens to be ,one of the foremost reasons it was not too distressing to be abandoned from Apple’s iOS homescreens, where it was not capable to do so.

Sarah is a technology writer at Technobb, where she covers apple, microsoft news and updates.
@ishtihari_007
Previous Google Map API Version 2 – It’s More Than Just a Map
Next Windows 8 style on an Android Phone – Launcher8 App