Though Microsoft is kindly supplying a free upgrade to Windows 10 for users of Windows 7 and 8/8.1, there are some features that were scrapped for the sake of the future of Windows. If you’re particularly fond of some of these features you might be disappointed to hear that they won’t be making their way to Windows 10. However, for the most part they’re either somewhat dated relics of the past or have newer and more flexible replacements entirely. Without further ado, here is the list of features that you may have grown to love in Windows 7/8/8.1 that will be removed in Windows 10.

Chances are you’ve come across Windows Media Center in some form or another. It’s a great app for streaming media stored on a PC to various devices including other PCs, game consoles and TVs. With the rise of streaming on nearly every platform however, there is really no reason nor need to use Windows Media Center to stream any type of media. Microsoft realized that it wasn’t necessary to continue supporting the platform when there are so many other alternatives to streaming.

Reliable old DVDs are starting to show their age, again from the rise of faster downloading and streaming capabilities. Microsoft has decided to stop supporting DVD playback altogether and will not include a DVD video playback app in Windows 10. Luckily alternatives like VLC exist that can do the job just fine.

These are either a love it or hate it deal, but Microsoft has decided to abandon their official Desktop Gadgets. If you absolutely loved that analog clock or weather gadget, you can still download third-party apps that support live tiles for the same thing.

4. Opt Out of Automatic Updates

If you have the base free version of Windows 10, you will no longer be able to opt out of future updates and will need to download and install them whenever they are released. Windows Pro and Enterprise versions can still opt out temporarily if they choose.

This is perhaps the biggest heartbreaker. Windows 10 will not only not ship with these glorious time wasters, they will actually be removed from your PC if you upgrade! Luckily, there are still official Microsoft versions of all of these games in the Microsoft App Store. It would have been nice to include them by default for nostalgia’s sake.

What’s a floppy drive? Some younger folks might honestly not know what a floppy drive is and Microsoft has decided not to support them any longer officially. If you still need to use one on Windows 10 for some reason, you’ll need to download a driver or get a separate Windows Update.

Microsoft’s cloud storage app will be replaced with an inbox version OneDrive but will still be accessible.

Overall, many of these removals are not that surprising and shouldn’t make much of an impact on the average user. These all have replacements ready for day one so the upgrade from Windows 10 shouldn’t be too painful other than those few minutes without Solitaire. 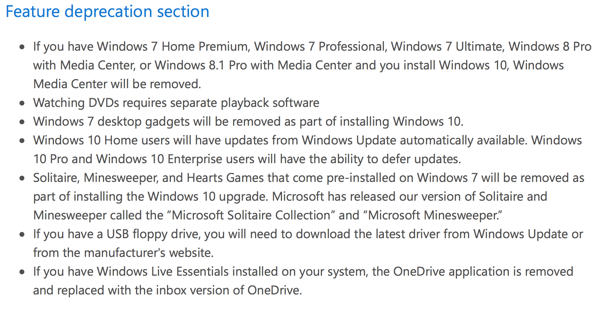