The recently released Samsung Galaxy S6 Edge has a very distinctive feature that sets it apart from all other Android phones. The display is curved so that it runs over the sides of the phone and this extra real estate is used as a notification bar and for additional interactivity. With ‘Edge Lighting’ you can use your phone as a handy alarm clock or set it to display different colors depending on who is calling you. It’s a pretty clever way to make use of that unused space and make phones more useful while sitting on a flat surface.

Of course such a dramatic new feature is bound to induce envy from other Android users who don’t have a curved display. So, developer Golgorz has created the next best thing with Edge Color Notifications, an app that emulates the ‘Edge Lighting’ display. Edge Color Notifications allows you to set lighting based notifications that show up on the sides of the phone. It obviously won’t actually go down to the edge since there is no screen there, but it can be quite visible if it’s bright enough and does a commendable job of bringing the feature to other Android devices. 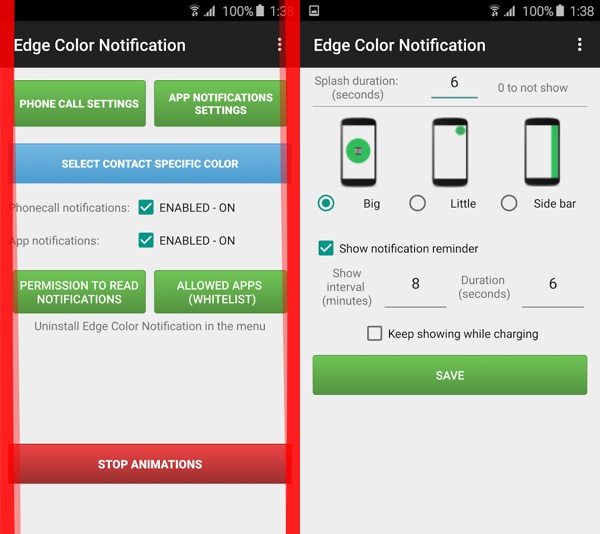 The app has thoughtful settings that allow you to tweak the color, placement, and width of the notification lights. You can also choose whether to have the light on the left, right, or both edges of your phone. A few different animations for the lighting effect are available to choose from. A very useful feature is the ability to choose different color lighting for different contacts and apps. So if you can at a glance know which app the notification is for, or what type of call you’re receiving which makes the notifications infinitely more useful.

The app is still very new and has already received a few updates. The developer promises that it’s lightweight and won’t put much strain on the phone’s battery and memory. With more users giving it a try, it’s set to receive additional updates and tweaks. If you’re really itching to try out an Edge Lighting-esque feature, Edge Color Notifications might be for you.